Home / Recipes / AIP (Autoimmune Protocol) Taco Seasoning ~ nightshade and seed free
This post may contain affiliate links from which I will earn a commission. Learn more in our disclosure.
9.4Kshares
Jump to Recipe Print Recipe 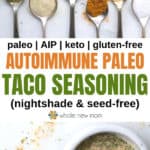 With this AIP Taco Seasoning Recipe, taco lovers can enjoy tacos again, even if they’re on the autoimmune paleo diet. And even if you’re not on a special diet, you will love this blend–it’s great and tastes fantastic on so many things! 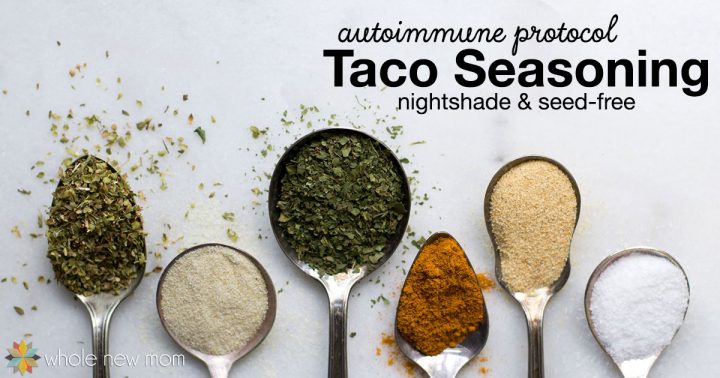 One of the things that really spices up a meal (pun intended) is seasoning blends. With the right seasoning mix, you can turn plain meats, veggies, eggs, or a salad, into something really special.

It’s been years since I have bought taco seasoning in the store — we actually buy very little processed food at all. Instead, we’ve used this Homemade Taco Seasoning for years, and it has served us well.

Problem is, that about a year ago, I started looking at the Autoimmune Protocol Diet (otherwise known as the Autoimmune Paleo Diet, or the AIP Diet, or AIP for short), and that changed everything.

My Life with Special Diets

For those of you who don’t know about the AIP Diet, it can be tough. I’ve been on a number of special diets over the years, but this one is just about the hardest one.

My special diet journey started with my son’s life-threatening food allergies that manifested themselves in severe eczema when he was an infant. I removed the top allergenic offenders from my diet so that the proteins wouldn’t be present in my breastmilk, and his skin healed miraculously. Basically I removed wheat, egg, dairy, soy, fish, nuts, and peanuts from my diet. Tough, but doable.

Then later, when it was clear that I had major issues with candida, I went on the candida diet. This was hard in a different way, but with alternative sweeteners like stevia, xylitol, erythritol, and the like, it’s very manageable once you get rolling.

I’ve tried GAPS for my oldest at one point. That was hard.

And Paleo. Hard, but mostly tough since I have to always be mindful of the candida thing.

I’ll tell you more later, but I ended up trying the AIP diet on the advice of a top blogger who knew of my struggles with Thyroid Disease and Adrenal Fatigue. She had done the AIP Diet for awhile and said it was a huge help, so I tried.

And it was hard. Again, mostly because I have the whole candida “thang” going on, which means you have to avoid loads of fruits, yucca, tapioca, cassava, and such things in excess, and they are the backbone of so much that is AIP.

Spices are hard too since you technically are supposed to not eat nightshades or seeds, and so many of the lovely fragrant, intense spices are just those.

Yup – all my favorites.

Perhaps they are yours too? 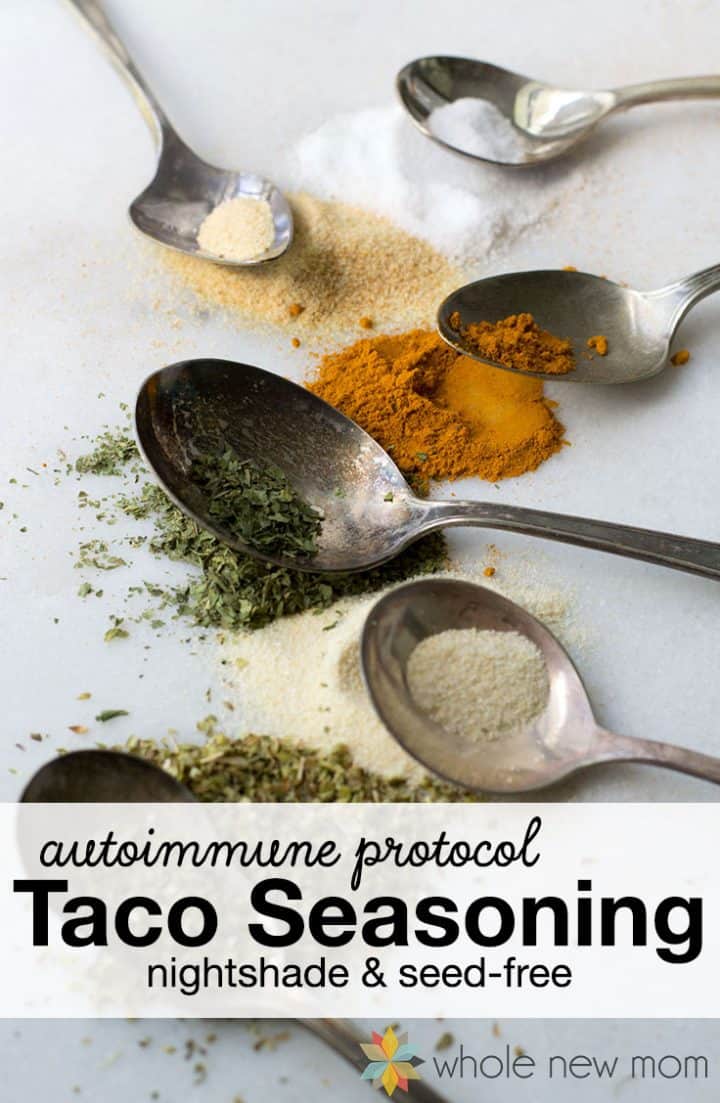 So — since I’m totally not into boooooring food, this recipe came about out of necessity for something really fun and tasty to spice up “meat and veggies.” Even though I am not totally following the AIP Diet right now, you never know when that might happen again, and I really wanted to have this in my back pocket. Plus, with the growth in autoimmune disorders in today’s society (due to the perfect storm of gut health and overall health insults), I really wanted to make this available to those who are desperately trying to heal, but are finding their diet to be less than appealing.

Whether you are on the AIP Diet or not, you will enjoy this blend — guaranteed.

My youngest, in fact, told me it was the best seasoning I have ever made. Now, he might say that in a few months about another seasoning, but he really liked it. And that’s a good sign :).

Serve this on tacos (of course), on other meats, as the seasoning for Homemade Sausage Patties, on salads, veggies… really on anything savory. And if you’re not grain-free you could have it on popcorn as well, or as a blend to put on Homemade Kale Chips.

The possibilities are endless.

Oh, and while you’re at it, here are great recipes for Grain-Free Taco Shells and Paleo Tortillas. So you’re all set for your next AIP Mexican Fiesta :). 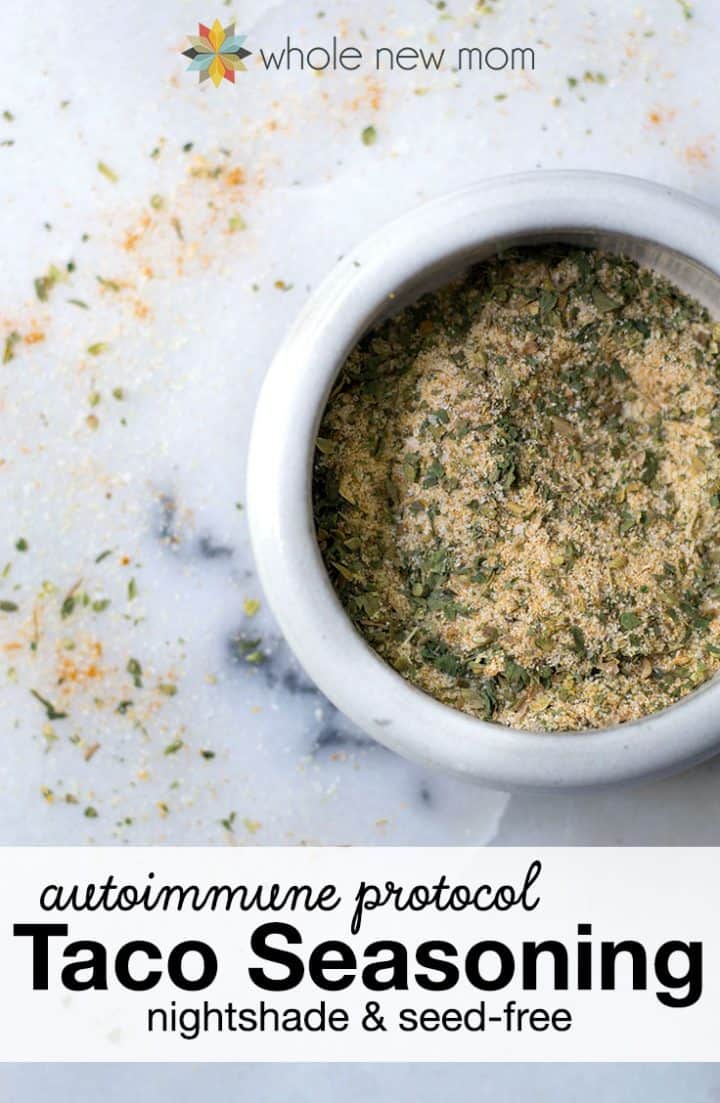 What You Will Need

For my spice shopping, I really like Frontier Brand. I’ve done taste tests with about 5 different brands, and Frontier Brand has won out every time and they are very reasonable. Starwest Botanicals, has really great spices too. 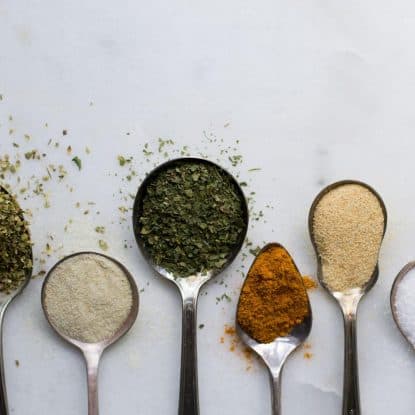 What is YOUR favorite seasoning?
How would you use this AIP Taco Seasoning? 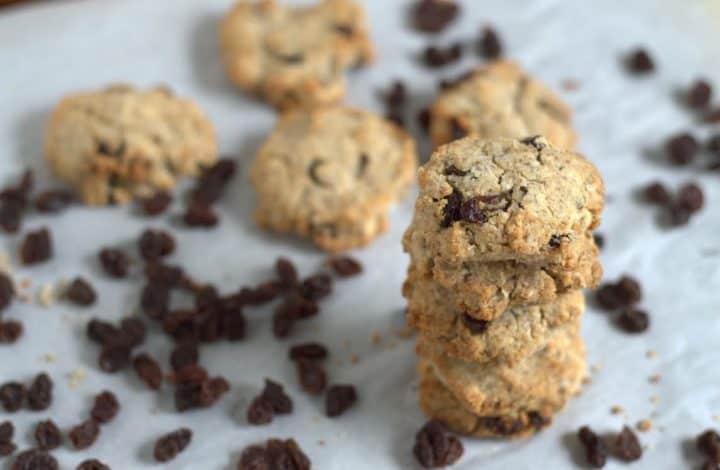 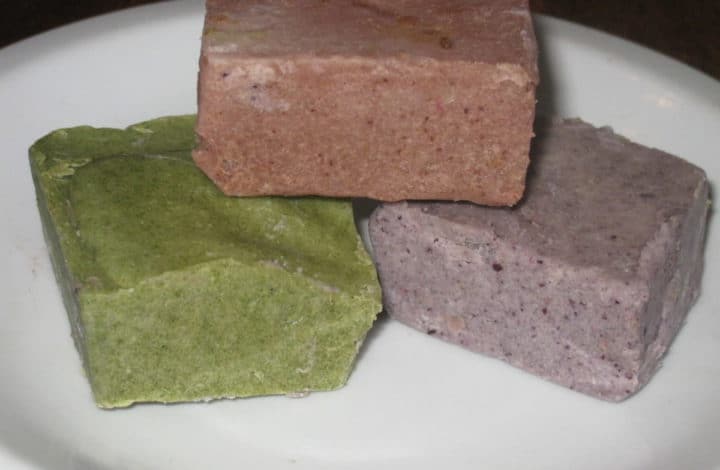 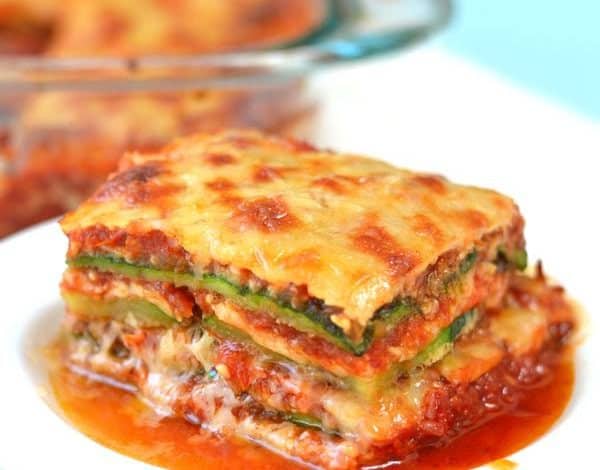 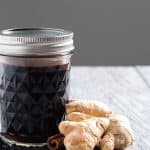 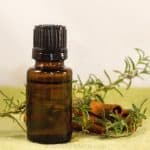