Home / Toxic Mold / Are Mycotoxins Making You Sick?
This post may contain affiliate links from which I will earn a commission. Learn more in our disclosure.
128shares 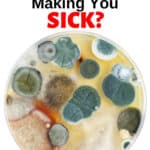 What Are Mycotoxins? Today we're talking about these toxic byproducts of mold, what they are, where they come from, how they can affect your health, and what to do about them. 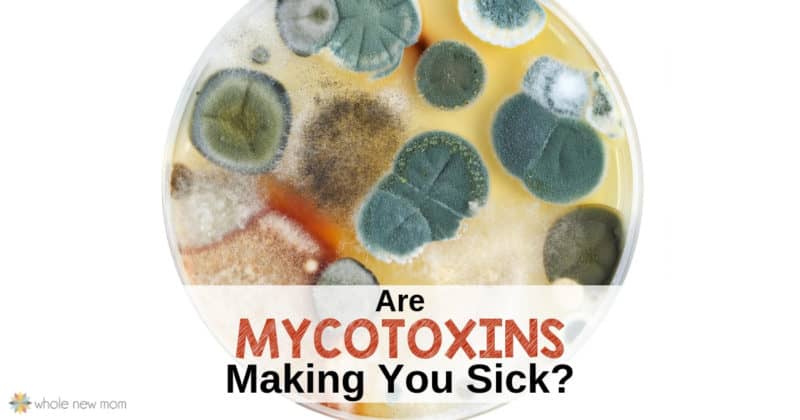 If you would have mentioned the word, mycotoxins” to me years ago, I wouldn’t have had a clue what you were talking about. However, over the past few years, I have had to learn what mycotoxins are because my life was turned upside down by them.

Mycotoxins damaged my health and they were the result of mold damage that we had in our house. We didn’t realize it at the time, but we were living in a moldy environment.

We couldn’t see mold in the livable space in our home, but it was in our attic. Mold exposure can cause a wide range of symptoms. However, it wasn’t until we moved out that I began to realize that mycotoxins were still impacting my health.

When we moved out of our old home, we took everything with us. Once we moved into our new home and started to unpack the items, I smelled a familiar smell…

I came to learn that mycotoxins travel. They especially like cloth and porous material.

Once in our new home, I began to feel better since I wasn’t living in the moldy environment, but I was frustrated because I wasn’t getting completely better. It was at that point that I finally realized it was the mycotoxins that were continuing to harm me.

I ultimately had to get rid of most of the items we had moved in from our old house.

So What Are Mycotoxins Anyway?

The term “mycotoxin” hasn’t been around very long and it isn’t very well known; however, it’s more common than most people realize.

Scientists coined the term in 1962 after a crisis resulting in the death of 100,000 turkeys in England. Their deaths were linked to a peanut meal contaminated with secondary metabolites from a fungal toxin.
According to the US National Library of Medicine,

“mycotoxins are secondary metabolites produced by microfungi that are capable of causing disease and death in humans and other animals.”

However, they also mention that “mycotoxins are not only hard to define, they are also challenging to classify.”

In other words, mycotoxins are a toxic chemical that some molds produce. In fact, you know that “new car smell” or even the smell that dryer sheets leave on your clothes or that smell that comes from dryer vents that you can smell when you're out for a walk and pass by a home where they are doing laundry? Yuck–those are volatile organic compounds (VOCs). In fact, mycotoxins are VOCs as well. They are similar in structure to ketones, aldehydes, alcohols, and aromatic and aliphatic hydrocarbons. You can see more about the concerns about these components of artificial fragrances here.

Mycotoxins Are Dangers to Your Health

There are over 400 mycotoxins.

Some mycotoxins are mildly annoying, resulting in allergy-like symptoms, but others can make you very sick and even be life-threatening. (source) Diseases caused by exposures to mycotoxins is known as mycotoxicosis.

Everyone responds differently to them, making it hard both yourself and for medical professionals to diagnose what is going on with your body and whether it is related to mycotoxins or not.

Some people don't exhibit much, if any observable response to mycotoxins. The reason being is partly due to genetics.

A quarter of the population has a gene (HLA-DR) that makes them more susceptible to mold toxicity. People with this gene have “difficulty recovering from mold and other toxin exposures.”

This explains why two people living in the same moldy environment might react differently. In fact, that is how it was in our case.

I became extremely ill due to our mold exposure, while my husband only had minor symptoms that didn’t interfere with his daily life.

Dr. Jill Carnahan is someone who sadly knows firsthand the impact that mold and mycotoxins can take on someone. She states,

when you’re made sick by mycotoxins you’re basically being poisoned. This is called mycotoxicosis.

She believes that mold and mycotoxins, along with other indoor air pollutants, may contribute to over 50% of her patient’s illnesses.

Mycotoxins can be acutely or chronically toxic–depending on the type of fungus and amount of exposure. They are fat soluble, so they can be stored in organs and tissue, resulting in mold toxicity and many serious health effects, including skin and lung infections.

Mold poisoning can also affect the liver, kidneys, and brain and the entire nervous system. Mycotoxins can also suppress the immune system and lead to death. 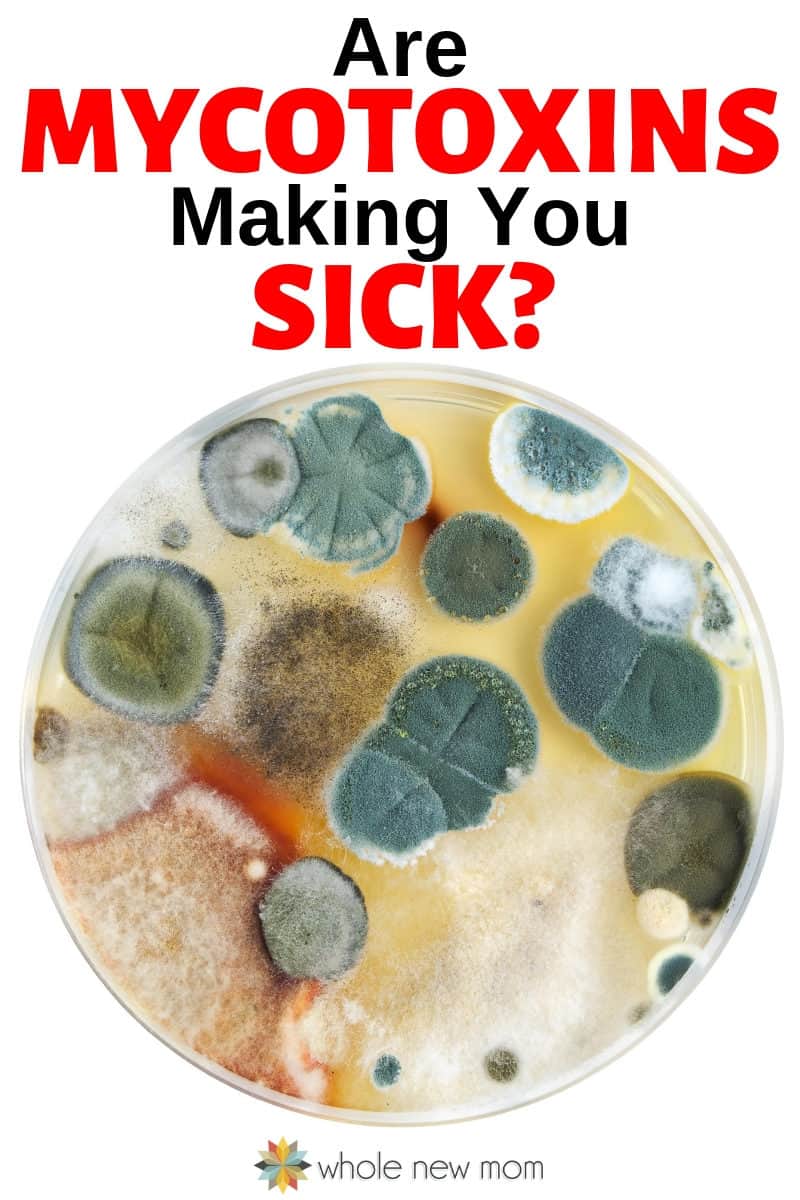 How Mycotoxins Get Into Your Body

It's not a pleasant thought, but mycotoxins can cause neurotoxicity impacting your brain. They can also damage your DNA and cause mitochondria (cell) dysfunction and suppress the immune system.

Mycotoxins can be found in crops that have a long storage process, such as grains.

Some of the foods which they can be found in are:

When it comes to food, Dave Asprey, who has also been negatively impacted by mold and mycotoxins states,

between soil-destroying pesticides and abhorrent factory farming practices, the US has the most severe mycotoxin problem of any country.

What he means is that our soil has been so badly depleted by modern farming techniques, that the “bad guys”, including mycotoxins, are unable to be kept in check by the good microbes in the soil, leading to a proliferation of toxic components in the food that you eat on a daily basis.

It makes sense that if you’re dealing with mold and mycotoxins, you should consult with a physician who understands mold toxicity and consider following a low mold diet.

Mycotoxins in the Air

It is estimated that over 50% of buildings in the US have water damage. You can see evidence of this everywhere–water stains on the ceiling, stains on the carpet, water dripping from ceilings, warped floors peeling paint. These aren't all definite signs of mold but they should be investigated.

And when you spill something wet on a carpet, even though you mop it up quickly, the moisture seeps through to the padding and gets trapped there, leading to mold. It only takes 48 hours for the mold to start growing–and then the mycotoxin damage begins.

Since modern houses are more tightly constructed, the toxins can build up more quickly. Additionally, modern houses in most countries are made with drywall, which is a great breeding ground for mold once it is wet.

Mycotoxins Through Your Skin

Mycotoxins can also enter the body through the skin, but this is a less common issue unless your skin is in regular contact with a source (think moldy clothing or a moldy body lotion, for example).

There are a few different ways you can test for mycotoxins in your system. One of the ways they can be measured is in your urine. You can have a complete panel of urinary mycotoxins run through Real Time Labs or Great Plains Labs. There are also blood tests which can help pinpoint if you are experiencing health challenges due to these toxins.

Another great company is Life Extension. They are very reputable and they have a mold toxicity test, plus a wide range of supplements that are highly regarded around the world. Just use this link and search for “Mold Illness Panel” and you can see the tests that they offer.

How to Address Mycotoxin Exposure

Test Your Home for Mold

If you have health challenges which doctors are unable to explain, I would highly recommend checking your indoor air environment. Test for mold.

If you know you have been exposed to mold, the best thing is to get out of that environment, do what you can to remediate the problem, and then work on preventing future mold exposure while you work on your health.

Work with a Practitioner Who “Gets” Mold

In addition to removing yourself from the environment, you will need to get the toxins out of your body. There are different protocols which can assist with removing the toxins from your body.

I highly recommend working with a healthcare professional whenever you try to detox. Detoxification is typically considered to be a good thing, but if your body isn’t healthy enough to detox, it can create problems. Think about it–if you can't get rid of the toxins, but you are mobilizing them (moving them around) in your body, they can end up circulating and going to places where you don't want them (think brain or other organs), or just overall making you feel worse.

Binders, such as activated charcoal and bentonite clay, which can help you bind the toxins to get them out of your body. You will also need to treat infections that come as a result of the exposure.

If you or a loved one you know suspect that you’re being impacted by mold or mycotoxins, I highly recommend seeing a functional medicine doctor who is familiar with mold illness, or another professional who is familiar with environmental illness. They can diagnose the situation and help put you back on the road to improved health.

The following book is written by one of the most well-respected mycotoxin experts in the world. It's worth considering as a resource when dealing with mold illness. 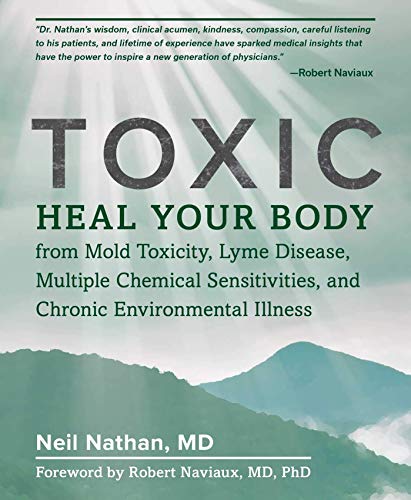 I hope this post has helped you to realize how much of a problem mold and mycotoxins can be and that you can use this information to improve the health of yourself, your family, and your loved ones.

Did you know about Mycotoxins before reading this post?
Have you suffered from reactions to mycotoxins? 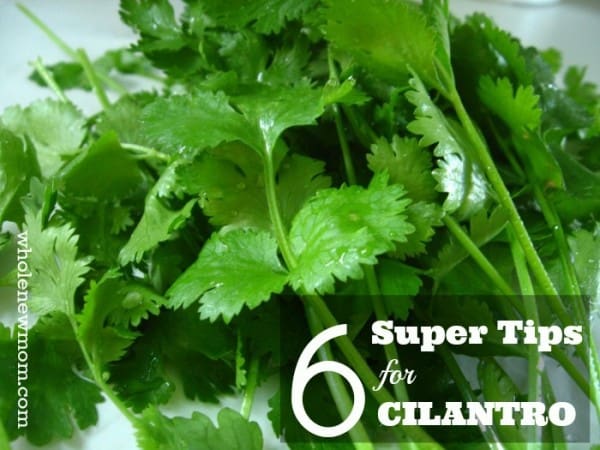 Cilantro-Tips and Facts You Should Know 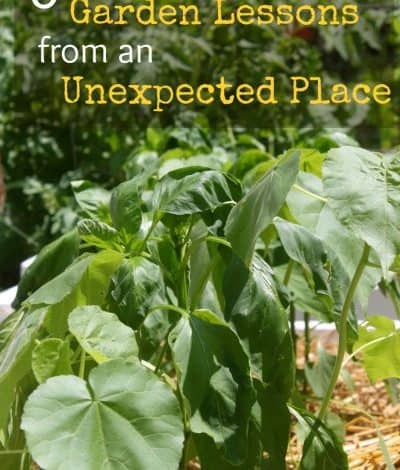 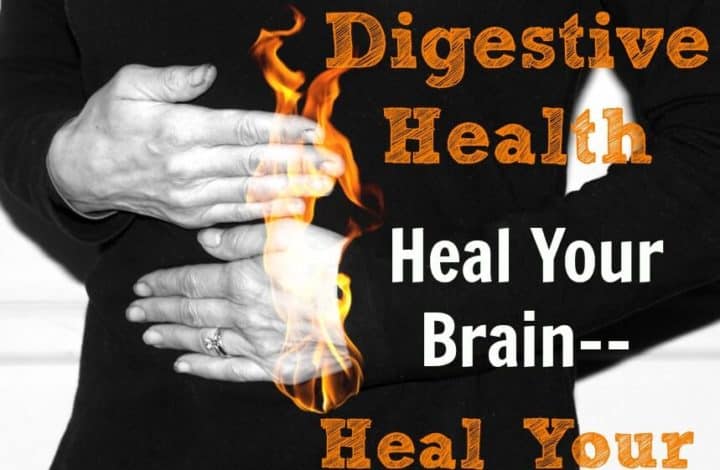 It was after overcoming personal health challenges resulting from toxins, stress and an unhealthy diet that my career changed from positions in corporate America to that of a fierce advocate for health-and-wellness and living naturally. I am the owner of Living Natural Today. There, I share resources about creating a healthier, more natural home and lifestyle.